I have made some progress with my Pint of Science Lecture complementary artwork. My 2016 scientist, Dr Alex Copley, has approved the preliminary design so I can now push the throttle right down and work in earnest. I am also currently trying to complete a commission of three beautiful labradors in their garden, so probably a bit of midnight oil will be flickering for a few weeks. We had one night without street lights, but they seem to be turned on again now, so it is still bright at night in our street – what about yours?

I have decided that my artwork will be an illumination, in which there will be blobs of raised gold leaf over the areas of Dr Copley’s research (hatched on the draft sketch, see below). There will also be gold leaf and shell gold in other patterns and motifs as the design unfolds. The border will be traditional Indian and Iranian patterns. The world on the elephant’s back will show the continental faults for the side of the earth showing the Asian continent and beyond. Dr Copley has suggested that I alter the 2013 dates in the border and on the sign to 2016, to reflect his 2016 research on which his lecture will be based. The left hand geology patterns have been designed from the Zagros mountains in Iran. Completed artwork for each lecture (circa 50) will have a little paragraph describing what it is all about. These are the media, painting and draft paragraph details of my little picture:

In the twelfth century BC people believed that the earth was held up by an elephant (or other large animal, for example, frog or llama) and that earthquakes happened when the animal moved. In 2016 we have moved forward and have much science and knowledge in understanding nature’s forces. Although man knows where the faults in the earth’s crust now are, he still insists on building along these faults! Science has provided much information on how to build stronger houses, but many poor places do not have the resources to do so, hence the sometimes huge death toll when disaster strikes. “Earthquake Safety Day” is celebrated in various places the world over, and in Nepal every year, but still Nature wreaks her devastation. This illumination shows the “golden” areas of research by Alex Copley (Rajasthan, Maharashtra, Gujarat in India, and The Zagros Mountains and Lut Desert in Iran); a camel is jumping for its life as the earth opens during a tremour, and the geological stratification of mountains and rocks is depicted lower left. 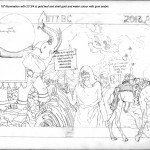