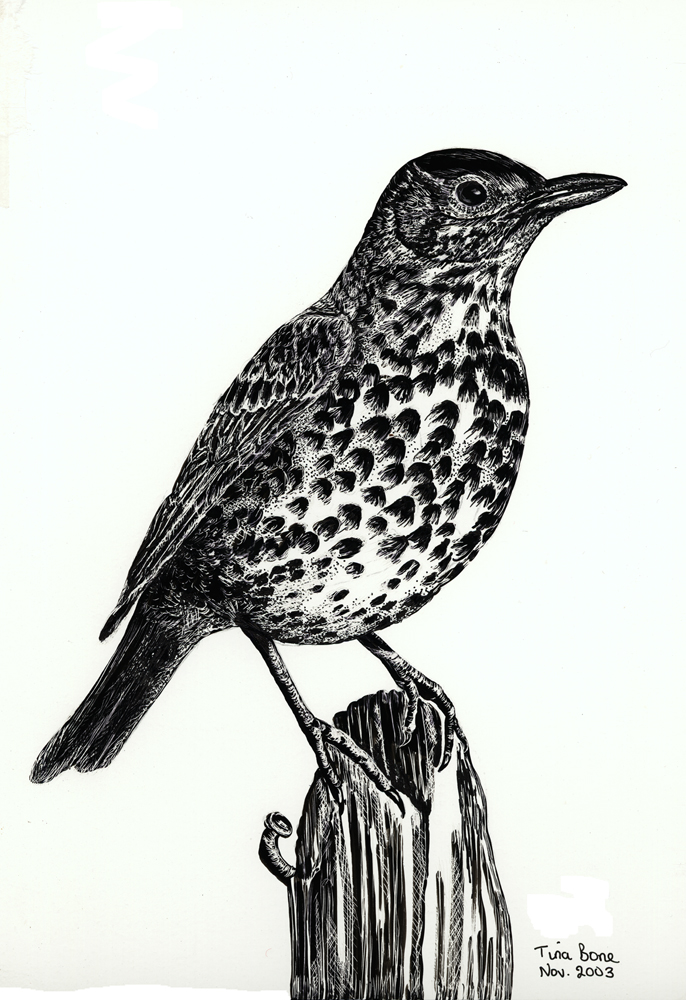 Songthrushes are getting rarer by the day. I am flattered that one still occasionally explores my little wild garden, but am perplexed that the dense habitat behind my garden where thrushes used to nest has now been totally obliterated because of new houses being built. And, very sadly, the visits of the thrush continue to decline (none at all during 2012, 2013, 2014! But at last one in 2015 – wonderful).

Poem:
A tale of three ‘dickies’ (Two Songthrushes and a Blackbird)
Two little dickie-birds sitting on a stump
On the edge of their patch they met with a bump
“What brings you here?” the left one said
“This is my patch you know, so leave or your dead!”
The right one said, “You have so many snails,
There’s plenty for both, so no need for flails”
The left one said, “I’m in no mood to share
So buzz off you stranger, be off, so there”
The right one said, “But please be so kind
For your well being, and my peace of mind
Let’s pool our resources, we’ll catch more food
If we both stick together and face the feud”
But left-hand dickie was not going to crack
For manners and intellect sadly lacked
So as he argued with the intruder;
Another dickie—who appeared to be ruder— “ Who was keenly eyeing the tasty meal
Flew down in a swoop the morsel did steal
So whilst the two dickies were squabbling away
Blackbird dickie made use of affray
Cackling with laughter, he flew to his perch
Leaving two dickies quite left in the lurch!