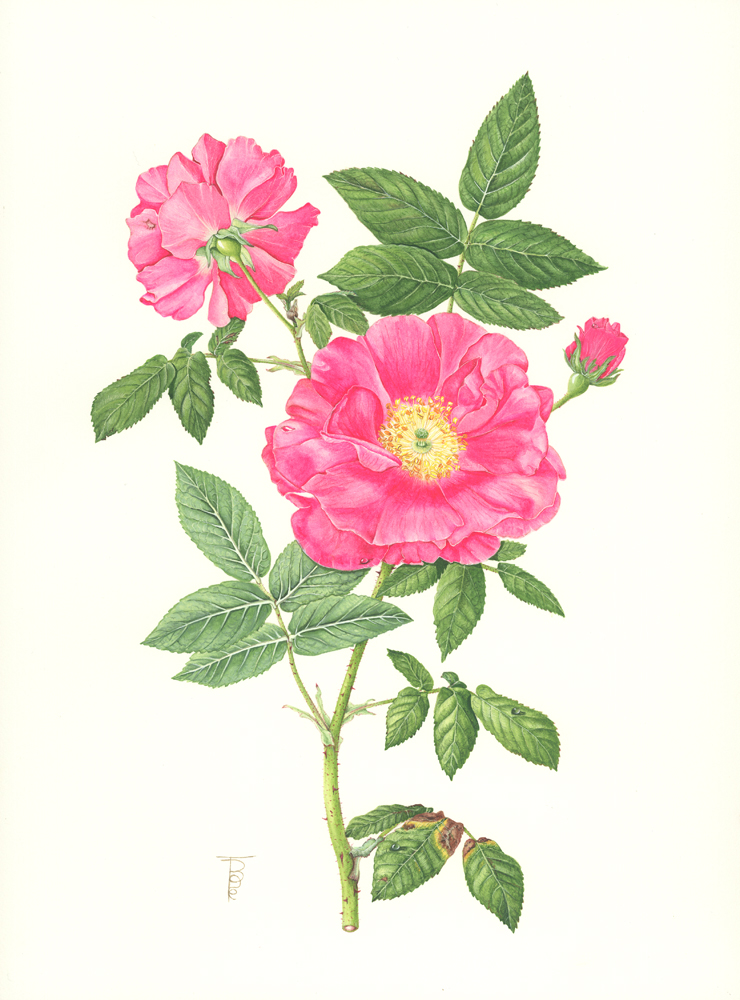 This artwork was specially painted for the first Society of Botanical Artist’s ‘Arts Butanical’ Exhibition at the Luton Hoo Walled Garden, Bedfordshire. Described as an exhibition by 22 of the UK’s leading contemporary botanical artists, the artworks were inspired by the records of the 3rd Earl of Bute, eighteenth century patron of the arts and founder of the Luton Hoo Walled Garden. The History was that in 1785, John Stuart, 3rd Earl of Bute, a courtier, politician, patron of the arts and sciences, and enthusiastic botanist, decided to record his own botanical ideas. In the face of the new Linnean system of classification, Lord Bute published his ‘Botanical Tables’ in 12 sets of 9 volumes stating that the tables were ‘composed solely for the amusement of the fair sex.’ Many thanks to CambridgeUniversity Botanic Gardens for providing the live plants for this artwork, and to Petula Stone for invaluable insights.

‘Petalacious’
Pink-on-pink is a ‘girly’ trend
For female garb is marked as ‘friend’
As blooming roses, none compares
With nature’s frills v. ‘barby’ wears
My description ‘Petalacious’
Might be a tiny bit fallacious
The gently moulded fronds of silk
With golden dustlets centre milk
For bees a buzzing scrambl’ing round
Until sweet nectar can be found
As autumn sees the petals fall
A juicy rosehip forms the ball
As winter sets most plants to rest
Blood-red hips for fauna fest
Hanging on the branch with thorn
And winter hedges all adorn.