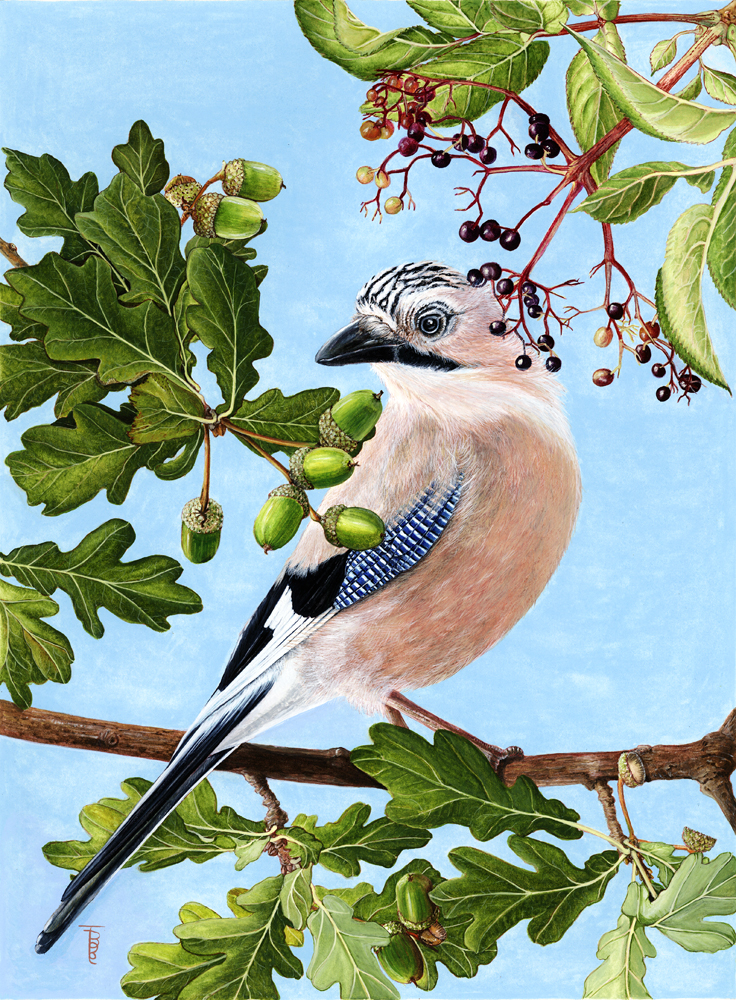 A very rare visitor to my little wild garden, but this one was spotted down the road a little way flitting between a small oak tree and elderberry and bramble hedge growing near a roadside agricultural drainage ditch.

The Eurasian Jay (Garrulus glandarius) is part of the Crow family (Corvid), slightly leaner than the famed Jackdaw. As well as being very partial to elderberries, acorns and insects, it will also take what it can get, such as eggs and baby birds, bats and small rodents. During the day they are known to attack tawny owls which in turn predate on the Jay at night. Goshawks and Peregrine Falcons also like a bit of Jay. Its call is a rasping screech, but it is also a great imitator both of human-made sounds and other birds. Sometimes it is difficult to assess whether a Jay is making a noise unless you can see it because of all the imitation sounds it can make. Whilst driving along Comberton Road, Hardwick (Cambs) in July 2014, suddenly a Jay flew across the road in front of me. I could not believe that it had a young blue tit in its beak—which was quite startling. So, even though they are beautiful birds to look at, they have a natural tendency to predate smaller bird species. And of course, that is just Nature, as tha tparticular Jay probably had young to feed.

Oh Jay, Oh Jay, Oh Jay, Oh Jay!
I’m looking this- then that-a-way
Black elderberries, plump and juicy,
Or crackling acorns, little beauties
Berries first because they’re ready,
Now don’t be greedy, nice and steady!
Pink and white with buffy hue,
And wings which flash with vivid blue
The startled jay’s immediate flight,
From danger is a wondrous sight
But when he sits amongst his food,
That puts him in a braver mood!