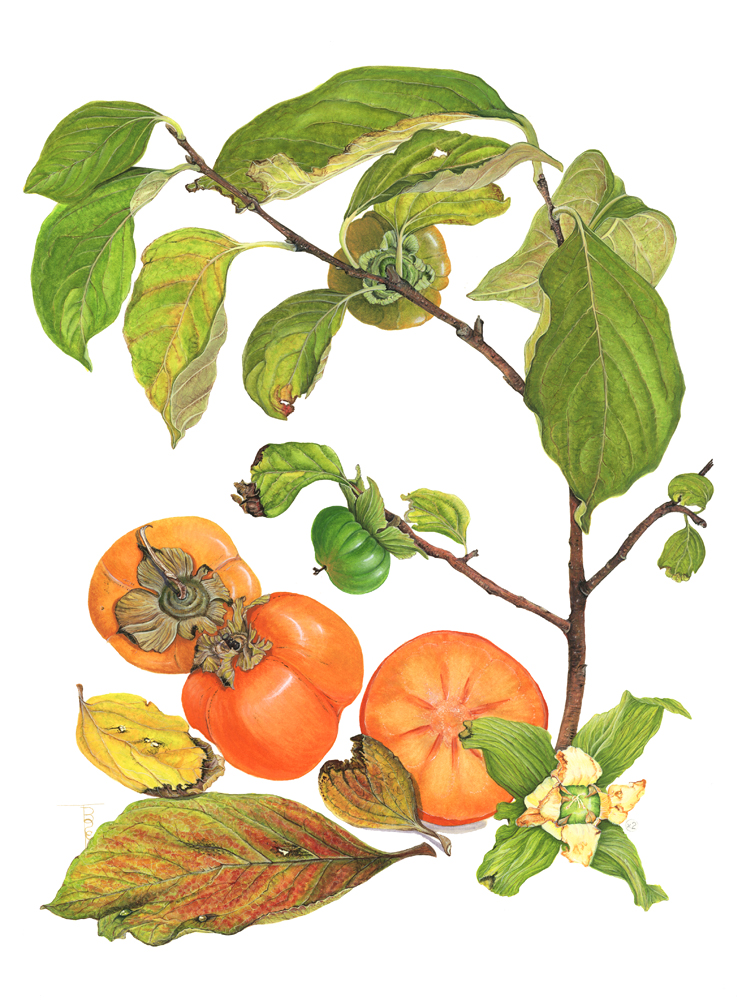 1212 Persimmon, Sharon Fruit, Diospyros kaki – Fuyu (‘Fruit of the gods: a theme in the various’)

18 September 2013: received a lovely email – “Dear Tina, Would you mind if we use your lovely Persimmon on our latest promotional material? All the best, The Arts Team, Luton Hoo Walled Garden. The painting was also published on the front cover of the Arts Butanical Catalogue (Exhibition ran from 30th October to 6th November 2013) [View Catalogue cover/Poster], as well as being featured in the publicity advertisements for the Arts Butanical Exhibition: [View screenshot of advertisement on bGallery Website]; [View screenshot of advertisement on HVA (Herts Visual Arts) Website]

My mum gave me two Persimmon trees a few years ago. I have ‘tended’ them by cutting them back fiercely each year to not upset my neighbour’s garage foundations, and my own porch! This year one of the trees flowered, and produced two fruits. The recent hard frosts meant that all the leaves and fruits were about to fall off the trees, so I just had to make a picture from the live specimens (having made a drawing of the flower earlier in the year, and now putting all the elements together). In 2014 one of the trees flowers profusely and it had tonnes of fruits on it – although they looked ripe, they had a very bitter taste so could not be used for anything (I had hoped to make persimmon jam!)

This golden orange globe of bliss,
Bathes the palate like a kiss
No worldly noun its taste described,
Its fleshy juice and tales imbibed,
My lovely mum gave me this tree,
It nurtures her fond memory.