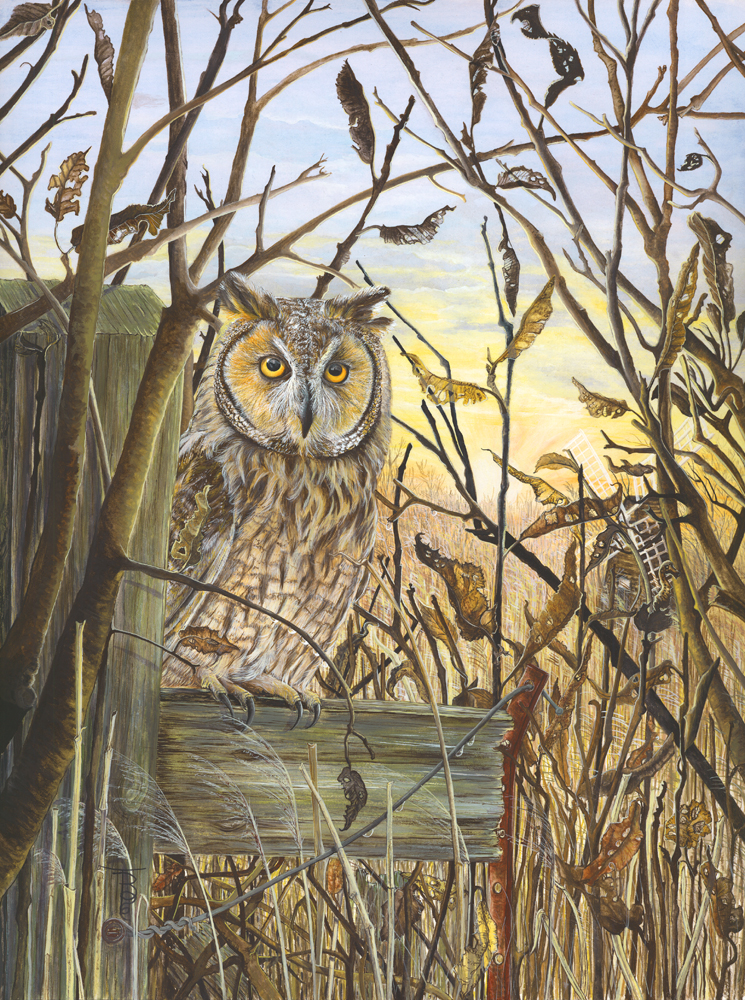 This picture was “Image of the Month” for June 2011 at www.birdingart.com

Long Eared Owl, Asio otus—previously: Strix otus.
The idea for this picture came to mind when I attended a caravan rally at Strumpshaw Steam Museum, late May 2009: hubby spent the days looking at steam engines and bygones, and I lost myself in the RSPB Strumpshaw Fen nature reserve. I saw the rippling trails of otters in the water, as they swam just below the surface scanning the waters for their next meal. As I walked back to base I noticed the leaf silhouettes against the lowering sun, and the black, shaded branches. Some leaves had holes and nibbled edges and they looked very ‘wintry’. My grateful thanks to Howard Cooper, Communications Officer at Wicken Fen Nature Reserve who confirmed that a long eared owl had been spotted in the nature reserve at the time, and he invited me to visit the reserve for further inspiration. The combination of Strumpshaw silhouettes and the old wind pump at Wicken Fen amongst the reeded, fenland landscape enlightened my mind. Although used in the preliminary drawing of this composition, I did not use any of the photographs I had taken when painting it, so the landscape is entirely from my accumulated memories. Many thanks to Paul Mason for lending me his taxidermal ‘Owly’, without which I would never have learned that the owl’s facial feathers look like wire, his bib is like the soft down pulled from the belly of a mother rabbit when making her nest, and the wing and lower body feathers are so light and delicate, they are like a seed head of a dandelion telling the time – a symbol of possibility, hope, and dreams; and those eyes….

WINTER LEAVES AT WICKEN FEN
A long eared owl was spotted there
Amongst the willows, alders bare
As ancient windmill pump is still
The sunset-gold your heart does fill
As darkness falls the owl awakes
Silent loom, then prey it takes.