Poems and Prose associated with twelve Illuminated letters for 2010 Calendar

Illuminated lettering was used to embellish the first letter of an important word in old, handwritten manuscripts, as well as describing stories with pictures. Download my short essay on the subject, entitled ‘ILLUMINATION: a Progressive Development’ 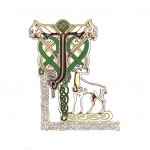 The celtic ‘J’ with knot surround, that links below to knotted ground
While roaring beasts above do glare, No bodies, but a splendid pair
They cap the letter in their bind, While watching o’er the golden hind 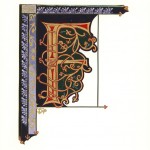 Illuminated letter F, Ottonian style, for the month of February.

Ottonian ‘F’ in splendid gold, With interlacing, also bold
A solid background—green and blue, A string of dots, as in a queue
Fancy borders winding down, That might adorn a princess gown? 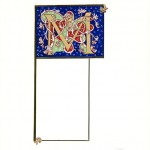 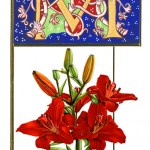 White Vine creeps a curving swell,
Where tri-flakes mingled as night fell
The shafts of red and green expound,
This era’s pattern all around
While snugly fits the lily’s reds,
And golden frame the whole embeds 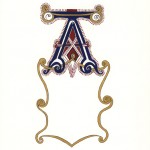 Illuminated letter A, celtic design, for the month of April. 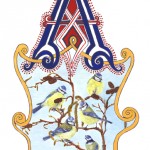 A celtic ‘A’ for April Fools,
With red dots round like little jewels
With interlinking spirals fine,
That bring the pictures all in line
The ‘Cheeky Chappies’ in the tree,
Provide a show for you and me! 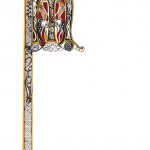 Illuminated letter M, Gothic style, for the month of May. 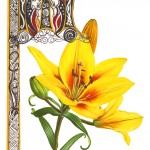 A bright yellow lily was part of the design (0810)

The darker side of celtic art,
Reveals all creatures shown in part
Affixed in mazes, round or square,
Illusive of a matching pair
It’s find the birdie, if you can—
or just enjoy the ‘lily fan’! 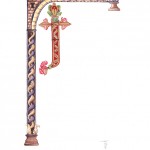 Illuminated letter J, Romanesque style, for the month of June. 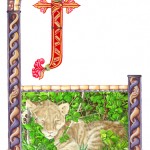 Sheer magic dawned in Romanesque,
As scribes sat pertly at their desk
The architects of weird designs,
The savage rules of olden times
But now no Christians are in bat, Just one plum-tuckered, real kool-kat! 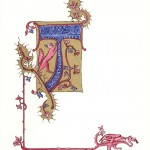 Illuminated letter J, Gothic style, for the month of July. 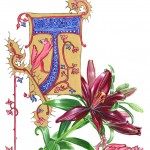 In Gothic halls grotesqueries reign, To calmer times, appear quite bane.
The golden floppy spines surround, The wolf, preventing falling down,
Of letter ‘J’ in patterned blue. See dragon, who is loved by few—
(except other dragons, of course!) 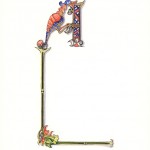 Illuminated letter A, Neo-Classical style, for the month of August. 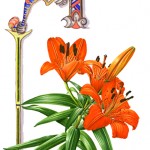 An Orange Lily adorned this letter (0809)

August ‘A’ is standing proud,
With golden bird and colour loud!
On spired stand with feathers fine,
He perches well to make the line
To meld the letter for to see—
Or quacking duck who wants some tea? 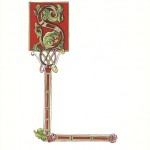 Illuminated letter S, Neo-Classical style, for the month of September. 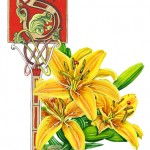 A Milky Yellow Lily was part of this design (0812)

Ostentatious flowing sheath,
Adorned with bright acanthus leaf
On pedestal of gold and red,
Culminates in lattice head
While layered colours in the box,
Run shadows round the waving locks 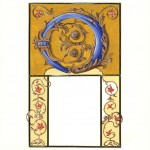 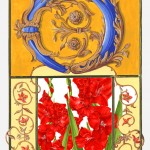 Opulent roundal, October’s ‘O’,
With tulips gold in central bow
The winding droop of filigree,
Entombs the scarlet gladioli
Flamboyant splendour—what a sight?
That fills a gloomy day with light 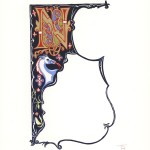 Illuminated letter N, Ottonian style for the month of November. 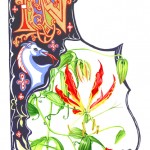 With regal backdrop, dead of night,
The golden ‘N’ shines out its light
The red of line demarks the two,
As horse of cloud comes into view
And peeping just as in the morn,
The Fire Lily lights the dawn 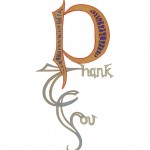 Illuminated letter D, Gothic style, for the month of December. 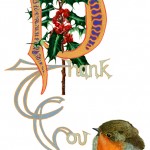 For Life and … for happiness,
which comes to all those who cherish others
God looked down the seventh day, said,
‘Yes, That’s good! Yes, that’s okay’.
They have it all; will live and die,
repent and join me up on high.
Holy day of rest and peace,
langour softly in release.
Come together all as one,
home to each and everyone.
Spill the beans, yes, spread the word,
sing it loud and you’ll be heard.
Spread His love, His warm embrace,
and make the world a pleasant place.