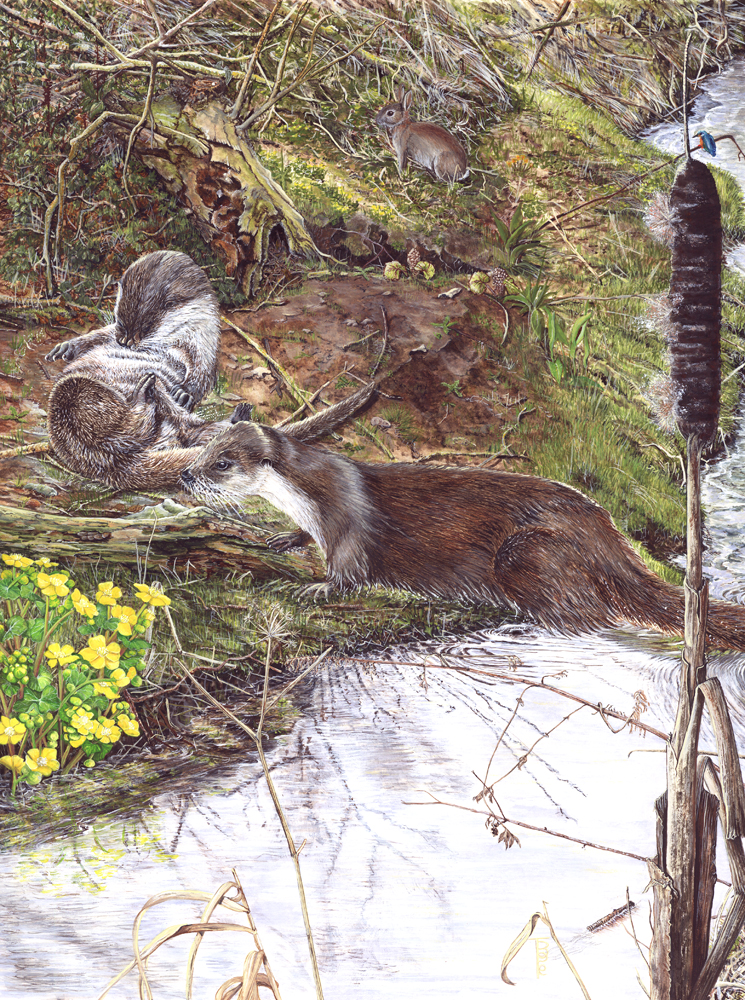 Commission brief: ‘Otters on a river bank’. (Birthday present from a sister to her brother). I had the fortune to view a kingfisher hole in a river bank (25 February 2012), for resource purposes, and whilst there I walked further along the bank and took some photographs in the hope of using one or two as a backdrop for this commission. The background is a depiction of an actual photograph of the brook, along which I know otters roam. As there is a kingfisher hole, I know there are also kingfishers. Rabbits abound as the brook abuts farmland both sides. The scene is set in early spring, and see how the previous year’s reed mace and other bank plants contrast with the new fresh Marsh marigold and sprouting Butterbur. So this is just right I think!

‘Oh itchy fur, must keep it clean, I’ll nibble here to make a sheen.’
‘But come into the water dear, As sky reflects in rippling mere.’
She thinks it’s time for fun and play, As frightened bunny slips away
‘Let’s splash amongst marsh marigolds, And ping the seeds from reed mace folds.
Or chase blue birdie from his pole, Or catch a fish, that’s in our soul!’
‘Chill out dear mate, let’s have a rest, And preen and glean to look our best.’

The painting “Otter Bank” will feature in a series of Riparian books I am co-writing with famous author, Dr S.M. Haslam. The following poem will also feature in the series:

“Torrid or Torrential – a brook in transit – the meandering Bourn”

I trickle up from down below, where pure and pristine waters flow
And bubbling in to light and sun, my source from Eltisley does run.
From ten miles west of Cambridge Town, where scholars toil in flowing gown,
Two hundred feet above the sea, with four in number tribut’ry,
Called Eastern Brook and Gascote Dean and Crow and Hay Deans too are seen.
Near Caxton village ancient ‘lode’, pointing north the Roman Road.
Called Ermine Street its way now crossed, the spoils of empire’s myst’ries lost.
Then footpath hugs my pleasing banks, through village Bourn my entrance flanks.
And fording over Caxton End, I speed on with meandering bend.
For ‘Bourn’ means ‘brook’ it takes the name, to you or me it means the same!
And on and on passed football ground, and Doctors’ surgery can be found.
I slip right through the village folds, as tees and greens my route beholds.
Where stood before great fields of corn, now shouts of ‘Fore’ are loudly borne.
Caldecote now comes to sight, and there I see a shimmering light,
As Dean Brook’s waters swish and sway, and slink inside me on my way.
Next Toft with grazing fields of green, I mark its bound’ry, though I’m keen,
To tell you that with time these change, as my meanders morph in range.
More shouts of ‘Fore’ as on I chase, Meridian line does cross my face,
And probing distant stars and moons, the Mullard dishes sing their tunes.
I form the watery binding space of Comberton/Barton’s southern face.
And just beyond old Foxes Bridge, from furrowed field and stony ridge,
Sweet Tit Brook chuckles into view and brings sweet waters all anew,
But scampers right across my girth to join with Long Brook in its mirth
Then on and on, I am northern rim to Eversdens’/Haslingfield’s country inns.
And on to Grantchester, meadows sweet, passed M11’s noisy street.
I swoon ‘neath widened bridge of road, no room here for Green Cross Code!
As traffic thunders all time long, you cannot hear my rippling song.
My deepest waters, bank so wide, where all the water creatures hide.
From run-off pipes now mainly fed, with hope that ‘harmfuls’ are all dead.
In Grantchester’s historic place, near Byron’s Pool, my ‘Sense of Place’.
Is it ‘Rhee’ or ‘Granta’ where I am, or is it the gentle, flowing, ‘Cam’?
As seawards rills envelope me, my water’s spirit now runs free.
Tina Bone © 2010