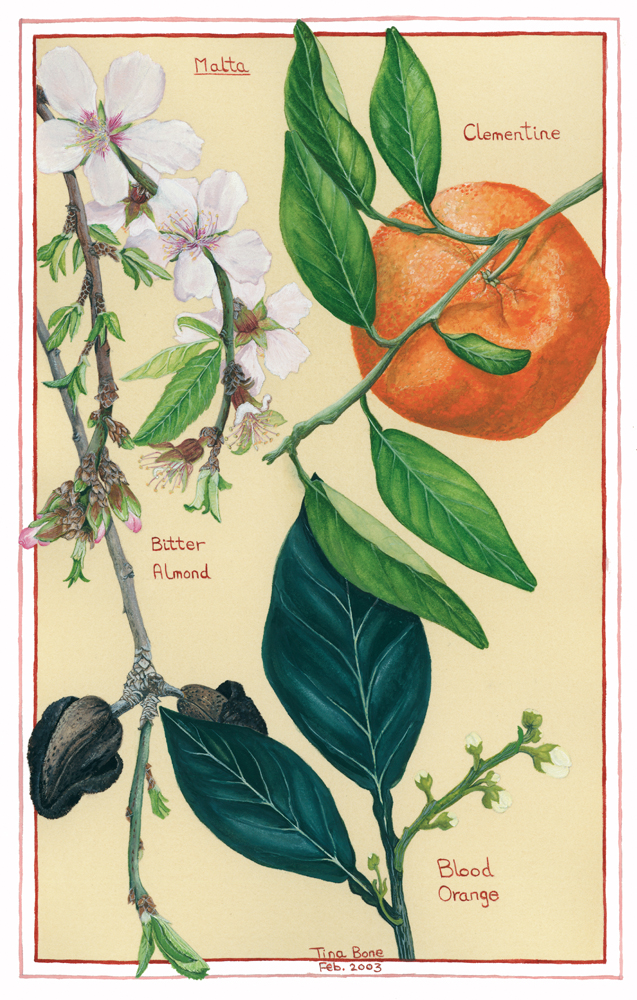 I was fortunate enough to be offered a chance to visit Malta in 2003, whilst my hubby was on a golfing break in Spain with the ‘boys’.

It was the first time I had been away by myself, and only the second time in an aeroplane. I survived the flight and was totally immersed in Malta and its habitat, and flora and fauna (although I was not keen on the many built-up areas).

For a whole week I went out with my sketch pad during the day, and in the evenings painted. I put these three plants together in one painting, as the colours seemed to fit so nicely.

Whilst in Malta, I was saddened to see the lack of surface water (ponds, rivers, etc.) so decided to write a short article about it, after keeping a daily diary during my visit of all the places, sounds and sights I encountered, which was published in the Tropical Agriculture Association Newsletter (now Agriculture for Development) ‘Fresh water and crops in Malta’. In, Tropical Agriculture Association UK, Newsletter, pp. 25–29, June 2001. 40pp., ISSN 1759-0604 (Print), ISSN 1759-0612 (Online).

This painting was to have been my February painting for the Nature’s Gems series Calendar (2005–2006), but upon reflection it would have looked rather odd to put in a picture of flora from Malta when all the other paintings were British!