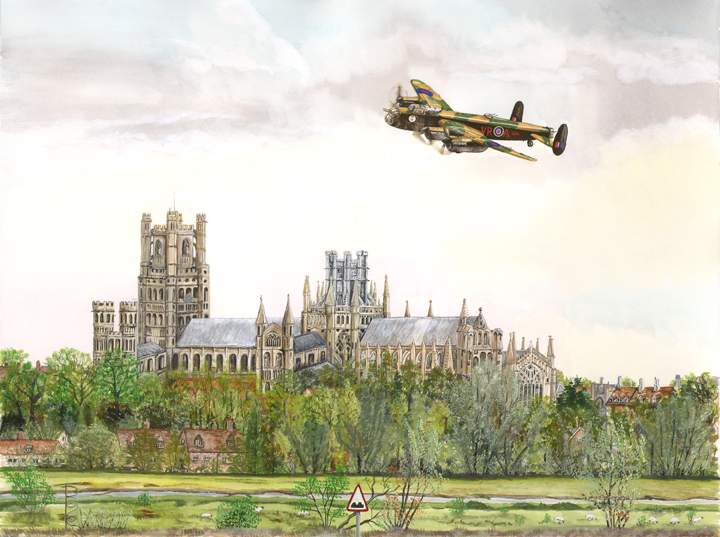 Commissioned artwork to portray a World War II Lancaster Bomber flying over Ely Cathedral. The commissioner’s engineering company is based in a road called “Lancaster Way”, so he asked for this particular composition.

I shall never look at Ely Cathedral in the same light again. It looks so beautiful as the “Ship of the Fens”, but when I studied the splendid Gothic architecture I realised that there is hardly anything in the design that is the same, even though it looks on the face of it that the cathedral is relatively symmetrical, there are so many elements on the building that perhaps should match, but sadly they do not. There are also some elements totally missing! This is totally in line with the “rules” laid down in medieval times for illuminating letters—things might look the same but on close inspection there are subtle differences.

I was pleased to be able to use a photograph I took myself of Ely Cathedral some years ago, so this helped a bit. I had resource material for the bomber from another commission so already had preparatory drawings for this. I also wished to show the wonderful striking colours of the Fen skies, which have to be seen to be believed.

‘Neath the great Fen skies of rainbow hues
A bomber flypast, right on cue
Above the Gothic mastly spires
The Ship of the Fens in sun’s attire
Trees of many different sorts
Hug its stone and leaded ports
Whilst drifting down towards the lea
Sheep graze sweetly in its ‘sea’