In March 2015 I ordered a cushion with my artwork on and received a lovely big white cushion, nicely finished. In March 2016 I ordered what I thought were the same size cushions, but with a different design picture on them (costing 99p more than last year). I received them this morning. I was very disappointed on opening the package when it revealed two tiny little cushions that do not even measure the 12″ across as mentioned in the specification order – which of course I checked as soon as they arrived and realized I had mis-read the instructions. I did order 12″ cushions (by mistake), but am most perturbed that the internal padding was torn and is stuffed in the cover so hard that I am sure the seams will burst very soon. They look as though they are a size 20 trying to fit in to a size 14!
I attach a photograph of the three cushions together – guess which one is the original purchase! I shall have to remove cushions for sale on my website for the moment and find an alternative supplier. As little cushions go, I think they look a little bit reasonable, but who needs a 10″ square cushion? It does not even support the whole of your back. I did not mind making the mistake in size ordering, but I very much do mind not receiving “what it says on the box”. 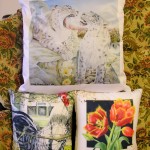